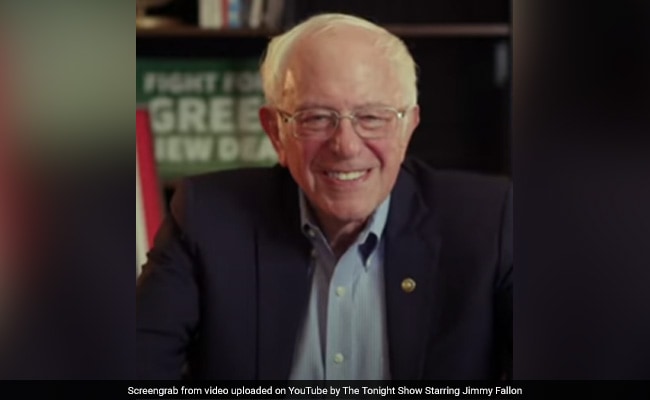 US Elections: Bernie Sanders Sanders dropped out of the presidential race earlier this year.

Top Democratic Senator Bernie Sanders’s words nearly two weeks ago about how the US presidential election would turn out and how Donald Trump would react appear to have turned prophetic with how the nail-biting counting process and drama has unfolded.

A clip of his predictions during an interview has been received over 27 million views in the last 24 hours.

Appearing on The Tonight Show Starring Jimmy Fallon last month, Mr Sanders, 79, was asked about when he thinks the election results will be known. He predicted there could be a flood of mailed-in ballots this election and this could result in a delay in the counting process to be completed.

“You’re going to have the situation which I suspect in states in Pennsylvania, Michigan, Wisconsin, other states where they are going to be receiving huge amounts of mail-in ballots. And unlike states like Florida or Vermont, they’re not able, for bad reasons, to begin processing those ballots until I don’t know – Election Day or maybe when the polls close. That means you’re going to have states dealing with perhaps millions of mail-in ballots,” Mr Sanders, who dropped out of the presidential race earlier this year, had said on the show.

just realized i could’ve captioned this “bernie sanders used future sight. it was super effective!” icb i blew a chance for a pokemon reference https://t.co/9IPqiZ0CnZ

“It could well be that, at 10 o’clock on election night, Trump is winning in Michigan, he’s winning in Pennsylvania, he’s winning in Wisconsin, and he gets on the television and says, ‘Thank you Americans for re-electing me. It’s all over, have a good day’,” Mr Sanders said.

And that is exactly how it all played out yesterday.

Mr Trump falsely declared victory over Democratic rival Joe Biden, with millions of votes still uncounted in the tight race for White House. The President said he would go to the Supreme Court. “We were getting ready to win this election. Frankly, we did win this election,” Trump said, addressing an extraordinary press conference from the White House at 2.30 am.

“This is a major fraud on our nation. We want the law to be used in a proper manner. So we’ll be going to the US Supreme Court. We want all voting to stop,” Mr Trump said.

In the October interview, Bernie Sanders said Mr Biden eventually win states which have a high number of ballot votes, triggering Mr Trump to respond with charges of fraud.

Mr Sanders had said, “But then, the next day and the day following, all those mail-in ballots start getting counted and it turns out that Biden has won those states. At which point, Trump says, ‘See? I told the whole thing was fraudulent. I told you those mail-in ballots were crooked. You’re know, we’re not going to leave office.”

Cut to November, as Mr Biden won Michigan and Wisconsin, bringing him close to a majority, Mr Trump made it clear he would not accept the reported results, issuing unprecedented complaints. His campaign announced lawsuits in Michigan, Pennsylvania and Georgia and demanded a recount in Wisconsin.

“man… he called it WORD for WORD (sic),” another user said.

(With inputs from AFP)