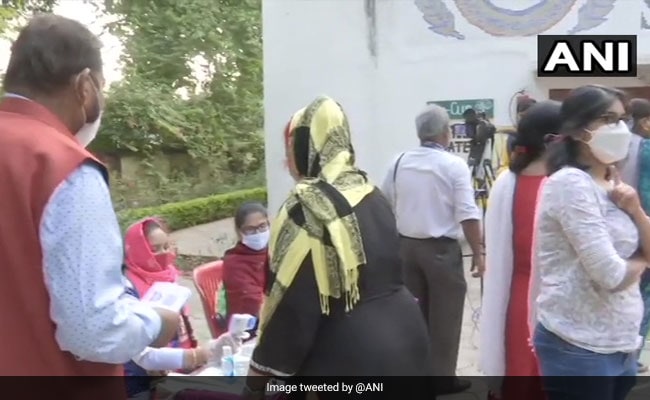 Around 33,000 security personnel have been deployed in 19 districts. (Representational)

Bypolls in 28 Assembly seats in Madhya Pradesh will be held on Tuesday, amid speculation over the prospects of supporters of Congressman-turned-BJP leader Jyotiraditya Scindia, who are in the poll arena on a BJP ticket.

Bypolls for 54 Assembly seats in 10 states are being held on Tuesday and Madhya Pradesh accounts for almost half of these seats.

The by-elections in Madhya Pradesh were necessitated after 22 MLAs of the erstwhile Congress government switched over to the BJP in March 2020, leading to the fall of Kamal Nath’s 15-month-old government.

Three other Congress MLAs followed the lead of Scindia and his supporters and joined the BJP. Another three seats in the Assembly are vacant due to the deaths of incumbent MLAs.

Voting for by-elections in Madhya Pradesh will be held from 7 am to 6 pm on Tuesday while adhering to the COVID-19 restrictions, an official said on Monday.

The last hour of voting will be for COVID-19 patients and people suspected to be suffering from the disease, state additional chief electoral officer Arun Tomar told PTI.

A total of 355 candidates, including 12 ministers, are in the fray for bypolls to 28 seats in the state. Around 33,000 security personnel have been deployed in 19 districts where these constituencies fall and all
preparations have been made to hold free and fair polls, the official said.

He said 250 flying squads, 173 static surveillance teams, and 293 police check-posts have been pressed into service.

There are total 63.67 lakh voters in the 28 Assembly constituencies, he said.

As many as 9,361 booths have been set up for people to exercise their franchise and out of these, 3,038 are placed under the ”critical” category, he added.

Campaigning for the bypolls was marked by acrimonious exchanges between the main rivals BJP and Congress.

In most of the seats, there is a direct fight between the BJP and Congress, while in two or three seats of the Gwalior Chambal region, a triangular contest is on the cards in the wake of the BSP’s presence there, political observers said.

It is for the first time in Madhya Pradesh that bypolls are being held in as many as 28 Assembly seats in the 230-member House in one go, an official said.

Congress MLAs who quit from 25 seats are now in the fray as BJP candidates. One more Congress MLA resigned recently.

The BJP currently has 107 MLAs, while the Congress has 87 legislators in the House.

The counting of votes will take place on November 10.