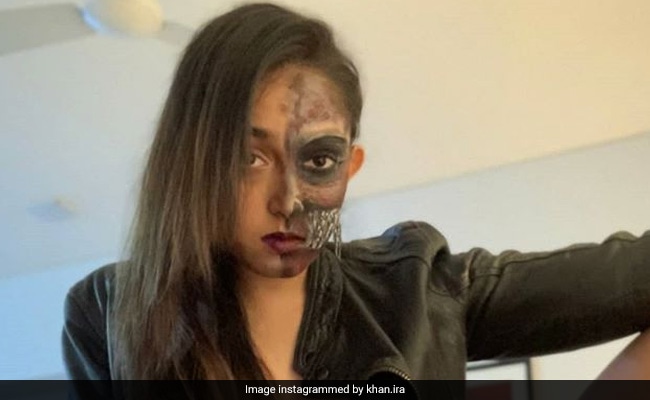 Happy Halloween guys! It’s the most spooktacular fun time of year again. Just like last year, Bollywood celebs treated us to some Halloween special posts, featuring cute witches and ghosts. From Neha Dhupia to Soha Ali Khan, stars posted super adorable pictures of themselves and their kids wearing scary-but-also-cute costumes. Aamir Khan’s daughter Ira Khan’s post deserves special attention. Neha Dhupia and her husband, actor Angad Bedi, posted pictures of the cutest witch ever – their daughter Mehr. The little munchkin, dressed as a witch, looked cute as a button. She can be seen posing with a gift given by little Inaaya, Soha Ali Khan and Kunal Kemmu’s daughter. “‘Witch’ one would you chose … #trick or #treat… #happyhalloween …. thank you Inni “boo” for this,” wrote Neha sharing the pictures.

Angad Bedi posted pictures of Mehr decorating pumpkins made by none other than Neha Dhupia on a plate. “Homemade #pumpkin made by Mehr ki Ma,” he wrote.

Ira Khan took Halloween makeup to another level. She posted a bunch of pictures of herself and her friends, in which she can be seen dressed up as Mazikeen, a fictional character from TV series Lucifer. “So what if Halloween isn’t a big thing in India? Any excuse to celebrate. And dress up. And get creative with whatever you have in your closet and Danielle’s closet and Zayn’s closet….I even considered trick or treating and scaring the kids in my building but.. COVID. So, we dressed up and sat at home, eating McDonald’s. How scary. Happy Halloween…#mazikeen #mazikeenofthelilim #lucifer #halloween #halloweenmakeup #itried,” she wrote.

Tanishaa Mukerji wished her fans on Halloween with this picture:

So, what are your plans for Halloween? Tell us in the comments section.