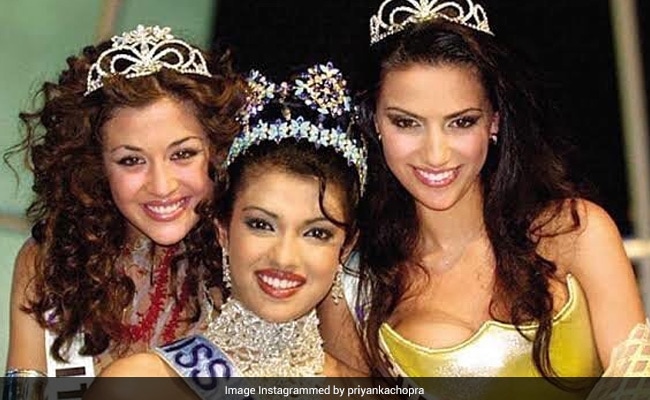 A throwback of Priyanka Chopra from Miss World (courtesy priyankachopra)

Actress Priyanka Chopra, speaking to People magazine’s new weekly digital show People In 10, opened up about a major fashion oopsie she experienced on the Miss World stage 20 years ago. “The year 2000 and I won Miss World, my dress was taped on to me. By the time I won at the end I was sweating so much because it was so stressful that the entire tape came off,” she said on the show. Priyanka added that her namaste hand gesture helped her deal with the situation: “The whole time while I was doing my walk or whatever when I won, I kept my hands like this in a namaste, which people thought was a namaste but actually I was holding my dress up. So uncomfortable.”

Fast forward to 2018 and Priyanka had another story to share about her Met Gala outfit: “My second Met Gala outfit was this blood-red Ralph Lauren beautiful outfit with the gold hood. But the corset under that thing, I couldn’t breathe. I felt like it reshaped my ribs. So hard to sit during dinner and I obviously couldn’t eat too much during that night.”

Priyanka Chopra was crowned Miss World on November 30, two decades ago. She was just 18. In a recent video shared on her Instagram, the actress revealed the “stupidest thing” her mother Madhu Chopra told her just after she won the pageant. “Picture this… I just turned 18 and won Miss World! When I finally reunited with my parents among all the chaos on stage, the first thing my mom said to me was ‘Babe, what’s going to happen with your studies?'”

‘Like a final’: Conte’s Inter backs to wall against Real Madrid...

Malaika Arora is giving us major fashion goals with her gorgeous...