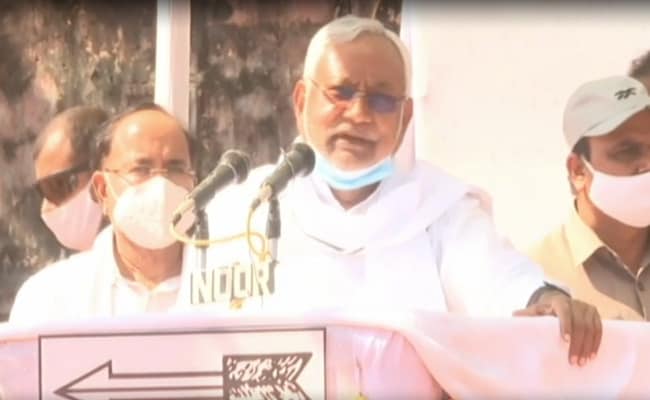 The Bihar Assembly election has yet another instance of Chief Minister Nitish Kumar and his key ally in the polls, the BJP, differing on important policy points.

On Thursday, as Mr Kumar addressed the issue of population-based reservation for jobs and education opportunities in the state, he said that while his government was in favour of such an initiative it could only be implemented with fresh census data. The statements by Mr Kumar were seen as an attempt to mobilise votes from marginalised communities.

However, Union Minister Ravi Shankar Prasad sought to temper such statements by pointing out that while his party supported reservation it would not do anything unconstitutional.

The JDU chief was addressing voters in West Champaran district, where a by-poll for the Valmiki Nagar Lok Sabha seat is due November 7. However he likely also had one eye on the ongoing Bihar Assembly elections, the final two phases of which will be held on November 3 and 7.

“… as far as the question of population(-based reservation) is concerned, this can only be decided after the census and that decision (on conducting the census) is not in our hands. We want reservation be proportionate to population of castes,” Nitish Kumar said.

However, Mr Kumar did not clarify if he was referring to caste-based census data. The Chief Minister has repeatedly demanded such data be part of that gathered by the census.

The centre has postponed the first phase of Census 2021 – which was scheduled from April 1 to September 30 – because of the Covid pandemic. A final decision on when it will take place has not been made but it is unlikely it will be held this year.

In February, the Bihar Assembly passed a resolution recommending that the centre include caste-based data in Census 2021. At that time Nitish Kumar had said: “Our demand is that caste-based census should be held in the country”.

The last time such an exercise was conducted was nearly nine decades ago.

“See… as far as reservation is concerned. we are very clear. We support constitutional reservation. The BJP has not only made promises to the marginalised, we have also delivered,” Ravi Shankar Prasad said, in a remark seen as a check on Nitish Kumar’s reservation claims.

In recent days and weeks, and particularly leading up to the first phase of Assembly polls (on October 28), the signs are piling up that the BJP is distancing itself from Nitish Kumar.

Even Prime Minister Narendra Modi, in his rallies, sought votes for the NDA and made only a cursory mention of Nitish Kumar towards the end of his speech. Neither the BJP’s video campaigns nor (many of its) hoardings across the state mention or display Mr Kumar.

Off the record, BJP leaders say all this is deliberate as the party now has feedback that resentment against Nitish Kumar is growing across all segments.

Voters are particularly peeved at Mr Kumar’s handling of the stranded migrant labourers from the state during the lockdown and his alleged indifference to the concerns of the common people – issues that are being used in spades by opposition Rashtriya Janata Dal’s Tejashwi Yadav.

Mr Yadav’s promises on breaking Bihar’s unemployment cycle also appears to have caught the imagination of voters and irked Nitish Kumar, who has questioned Mr Yadav on his plans for providing jobs and the source of funds for their salaries.

The results of elections for the 243 seats in the Bihar Assembly are due November 10.