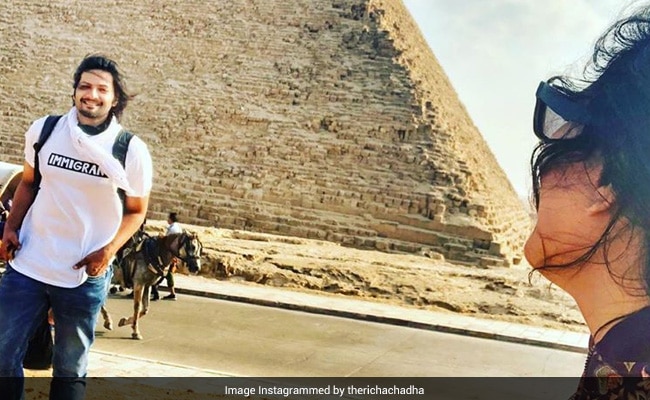 Richa Chadha and Ali Fazal, who flew to Egypt last month to attend the El Gouna Film Festival, took some time out of their busy schedule to visit the pyramids at Giza. The actress posted pictures from her sightseeing tour on Thursday evening on Instagram and described her fiancé as “the best travel partner.” She wrote: “If you think Guddu (Ali Fazal’s character’s name in Mirzapur) is all about guns, he’s got you fooled…. he’s the best travel partner … always up for adventure, an easy smiler, easy on the eyes too, tries new food, carries the world in his backpack (band-aids, water bottles, sanitizer et al)… he can go from lonely-planet type travel to the lap of luxury in seconds and is at home in both scenarios… how perfect does one need to be! #pyramidsofGiza #egypt #wonderoftheworld.”

In a separate post, she posted a picture of a Giza pyramid and wrote: “There’s something humbling about being in the presence of a magnificent structure that’s the oldest thing you’ve seen… thousands of years ago, millions of people built this on instructions of their kings, in one of the oldest cities of the world… wish to visit Harappa someday. This one was on the bucket list…#Egypt #firsttravelsinceCovid #Giza #pyramidsofgiza #CoronaJaNa.”

Meanwhile, check out some more photos of Richa and Ali from their Egypt trip:

Ali Fazal and Richa Chadha have been together for over five years now. The couple, who got engaged earlier this year, were supposed to get married in April but postponed their wedding because of the coronavirus pandemic.

In terms of work, Ali Fazal and Richa Chadha will next be seen together in the third instalment of the Fukrey series.

Actor Ashish Chowdhry, Who Lost His Sister And Brother-In-Law In 26/11 Attacks, Shares An Emotional Post