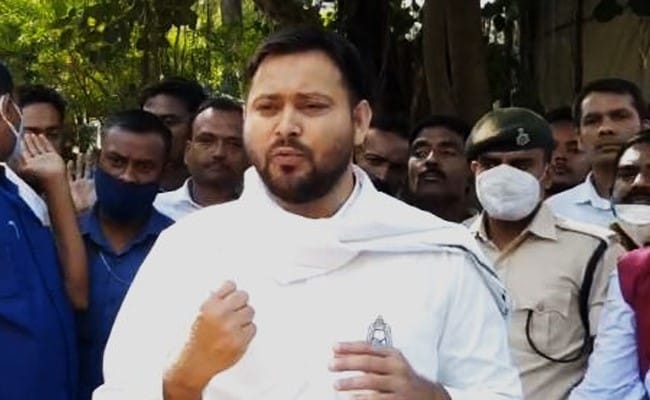 RJD leader Tejashwi Yadav, who has turned out to be a crowd puller at Bihar election rallies, this morning tweeted 11 questions for Prime Minister Narendra Modi ahead of his visit to the state. PM Modi will address four back-to-back rallies today in Bihar, where voting for three-phased elections began on Wednesday.

In his list of questions, shared on social media just an hour before the Prime Minister begins campaigning, the 31-year-old RJD leader asked the NDA government about issues related to unemployment, migration, and the special status for Bihar – often used by opposition parties to attack the government.

The state has been lagging behind as far as “education, and health standards,” are concerned, Mr Yadav said in a post on Facebook.

Using the reference of “double-engine government”, which he often uses for the BJP-JDU coalition government, Tejashwi Yadav asked: “Prime Minister, tell me why the double engine government of Bihar, which is continuously making noise on tap water scheme, spends only 4 per cent of the total budget on water supply and sanitation?”

Bihar is “the center of unemployment,” Tejashwi Yadav said in his the post, adding that “unemployment rate – under the ‘double engine’ government – is 46.6 (per cent)”. He also alleged that the migrants, who were left jobless amid coronavirus lockdown, didn’t get benefits of the government schemes.

“Despite the issue of job cards to a total of 11 lakh families between April and August, only 2,132 families could complete 100 working days in Bihar? Why so?” he asked.

Amid a massive election campaign, fierce attacks are being launched by the leaders at the election rallies.

Earlier this week, PM Modi had labelled Tejashwi Yadav as “Jungleraj ka Yuvraj,” suggesting a poor state of law and order in the state during the Lalu Prasad Yadav government.