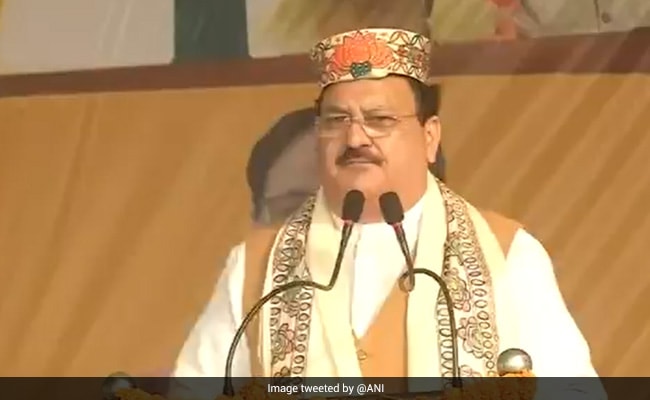 Prime Minister Narendra Modi has done what US President Donald Trump failed to do and “saved the country” from the novel coronavirus, BJP President JP Nadda declared Thursday at an election rally in Bihar’s Darbhanga, which goes to the polls on Saturday in the final phase of voting.

Praising the centre’s handling of a pandemic that has, so far, infected nearly 84 lakh and killed over 1.24 lakh people in the country, Mr Nadda referred to the ongoing US presidential election and the multiple criticisms of Mr Trump’s handling of the Covid situation – an issue that has featured prominently in the campaign of his Democratic challenger, Joe Biden.

“The results of the US elections are being declared and the allegation against Donald Trump is that he could not handle COVID-19 properly. But Modiji saved the country and its 130 crore population by taking timely decisions,” Mr Nadda said.

#WATCH: Results of US elections are being declared and the allegation against Donald Trump is that he could not handle COVID-19 properly, but Modi ji saved the country with 130-crore population by taking timely decision: BJP President JP Nadda in Darbhanga#BiharElectionspic.twitter.com/Rs67IHqHDL

Mr Trump, who, on Thursday night, yet again alleged voter fraud without evidence, is on the verge of losing the US presidential race, with Joe Biden edging closer to victory amid an election landscape hit hard by the coronavirus pandemic.

India, the second worst-hit nation by the Covid pandemic, is 11 lakh cases behind the United States. This morning over 50,000 new cases were recorded – the first time since October 26 that the mark has been breached – amid concerns over a surge in cases because of the festive season.

The Modi government has been criticised by the opposition – most notably Congress’s Rahul Gandhi, whose party is part of the mahagathbandhan in Bihar – for its handling of the pandemic in India.

In September the centre hit back by presenting data that said between 14 and 29 lakh cases and as many as 78,000 deaths had been prevented because of the nationwide lockdown imposed in March.

The centre has also frequently compared figures from more developed nations to indicate India is in a relatively better position (fewer cases and deaths with reference to population size), but experts have questioned the lockdown strategy and possible under-reporting of Covid figures.

Bihar, facing a massive influx of migrants who had left the state looking for jobs but were forced to return because of the lockdown, has recorded over two lakh cases and 1,000 deaths so far.

The migrants, of whom there are more than 32 lakh, were promised jobs by Nitish Kumar but many have been left disappointed with the state government’s inability to provide employment – something that has provided opposition leaders like Tejashwi Yadav with ammunition.

Nitish Kumar has dismissed Mr Yadav’s job promise as “bogus”. It is unclear if Mr Kumar extended that remark to the BJP’s promise.

Campaigning for the third and final phase of the Bihar election ends today, with voting for 78 seats set to start early Friday morning. Results for the election are due November 10.

With input from ANI

Flight delayed to fly in organs from Rajasthan, save four lives...

Joe Biden Twists Ankle After Slipping While Playing With Dog

Amid farmers’ protests, PM Modi comes out in strong defence of...