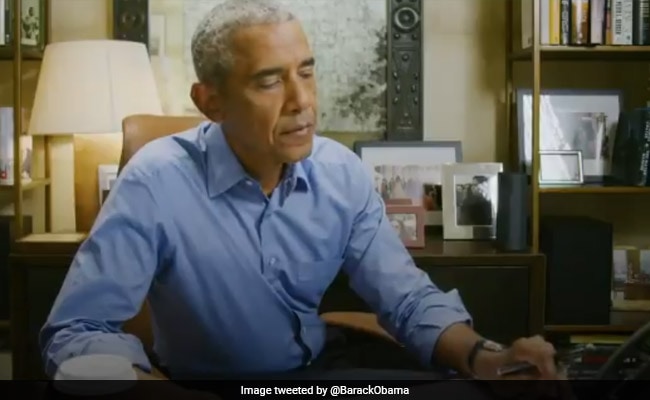 An unexpected phone call almost gave US resident and a new mother Alyssa a “panic attack”. But it was all good after the 2-minute phone call with former President Barack Obama concluded with him speaking to her 8-month-old son.

Barack Obama is keeping no stones unturned to campaign for his ex-Vice President and Democratic candidate Joe Biden. A close race to the White House is on as Joe Biden wrests President Donald Trump for presidency as Election Day in the USA closes in on November 3.

And with the coronavirus pandemic affecting millions across the US, Barack Obama has opted for a safer option to campaign for Mr Biden – phone calls.

He was urging everyone to vote for Joe Biden through what he called “phone banking” and Ms Alyssa was one of them. He shared the much-loved video of the interaction on his Twitter account.

You could be the difference between someone making it out to the polls or staying home. And many states could be decided by a handful of votes. Join me and make some calls for Joe in the last few days of this election: https://t.co/FZknijCx0Epic.twitter.com/XGUnAArRXW

Surprised at the call, she joked about having a panic attack before saying she would love to vote for Joe Biden and his running mate Kamala Harris.

Mr Obama also urged her to tell her family and friends to vote for Joe Biden.

Mr Obama also volunteered to give Alyssa her polling station details if she needed and proceeded to ask about a background noise – a baby’s cackles.

Turns out, Alyssa’s baby Jackson wants to talk on the phone whenever someone is on a call.

The 8-month-old was then on call with the former President, who served two terms till Donald Trump won the elections in 2016 against Hillary Clinton.

Alyssa then asks her child to say hi to the former President.

Mr Obama then said he understands how it is for a mother with an eight-month-old didn’t want to keep her waiting. He exchanged pleasantries and ended the conversation.

Campaigning is on in full swing in the US with both Donald Trump and Joe Biden have packed schedules of last-minute campaigning.

Joe Biden has a big lead in national polls and ahead in enough swing states to allow multiple routes to the 270 electoral votes needed to win the White House. Donald Trump has a hectic campaign trip through Wisconsin and Pennsylvania on Monday, aimed at saving the key states he won four years ago.

Americans have voted in large numbers, already casting a record 93 million ballots, about two-thirds of the overall 2016 vote count of 138.8 million. Some 239 million people are eligible to vote this year.