Tiger Shroff is an avid social media user. He enjoys a massive fan following on Instagram. Recently, he is making headlines as he made his debut as a singer with the song titled ‘Unbelievable’.

Recently, the actor took to his Instagram handle and revealed that he will soon release the acoustic version of his song ‘Unbelievable’. The post was captioned as ”Thought of thanking and dedicating a few lines to you through an acoustic. Coming soon ❤️🎶 #YouAreUnbelievable @iamavitesh @bgbngmusic 🎥 @shariquealy”.

In the brief video, Tiger is seen in a breezy avatar, standing in front of a microphone and humming his song ‘Unbelievable’.

As soon as he dropped the teaser, his rumoured ladylove Disha Patani was all impressed. Tiger’s sister Krishna Shroff was all hearts for the video.

Check out the video here:

Check out their reactions here: 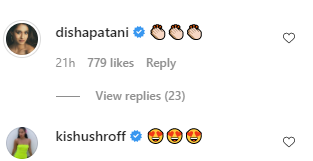 Meanwhile, on the work front, the star was last seen in ‘Baaghi 3’ with Shraddha Kapoor, Riteish Deshmukh and Ankita Lokhande. He is all set to feature in ‘Heropanti 2′. Helmed by Ahmed Khan and produced by Sajid Nadiadwala, the film will be released on July 16, 2021.

5 things you should know about ‘Jallikattu’, India’s official entry to the Oscars | The Times of India

Pele mourns Maradona: ‘I hope we’ll play together in the sky’...

Cars Parked On Chennai Flyover Ahead Of Cyclone To Avoid 2015...